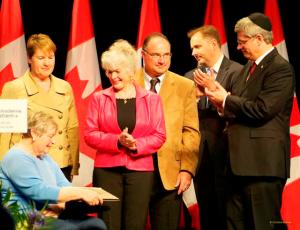 On April 23/12 Israel Truth Week founder Mark Vandermaas led a bus trip to the Canadian War Museum in Ottawa for the National Holocaust Remembrance Day ceremony with people from the London, Hamilton, Caledonia and Niagara regions. There, he was honoured to be part of the candle lighting ceremony recognizing the ‘Zachor Coalition’ — the group of organizations which makes the event possible.

The bus was provided by the Canadian Society for Yad Vashem, organizer of the event intended to honour survivors, victims and Gentile rescuers of Jews during the Second World War.

Prime Minister Harper was the first to speak, and his speech was very well received:

After the Prime Minister’s speech the Canadian Society for Yad Vashem bestowed the great honour – on behalf of the Israeli government – of the title ‘Righteous Among the Nations’  on the families of Klaas & Jetske Dreijer who saved Jews in Holland, and Karolina Juszczykowska, a single mother in Poland who was shot by the Nazis for hiding two Jews. You can read their courageous stories in the Society’s news release: 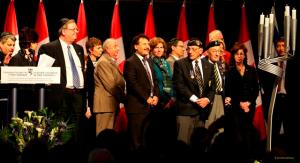 Other dignitaries spoke and helped light candles. Elizabeth May of the Green Party was called to speak and light the candle for the Zachor Coalition (photo R, Ms. May is not visible). Mark Vandermaas was called to the stage as a representative of two churches — Royal View Church in London, and Victory International Church in Hamilton —  who had made it possible for him to bring 46 people  to the event from the London, Hamilton, Caledonia and Niagara regions.

It was Royal View that made their facilities available for the Israel Truth Week Conference where the trip was first announced, and it was Victory International Church leader Dr. Peter Marshall who helped fill the bus by enthusiastically encouraging his congregation to participate. The bus was provided by the Canadian Society for Yad Vashem.

Those making the trip included three speakers (in addition to Mark Vandermaas) from the Israel Truth Week Conference:

It was a very long day, especially for those who boarded in London at 7:00am and didn’t return home until 2:00am the following day, but nearly everyone enthusiastically raised their hands when asked who wanted to make the trip next year. Here are some comments received:

From a Christian passenger…

“Dear Mark and Debbie, I wanted to take this moment to personally thank you both for the hours that you dedicated to the Israel Truth Week but what is on my heart right now is the events of our trip to Ottawa. The experience will forever last in my heart and has given us a further tie and bond to our beloved Jewish bothers and sisters. Just the coordination alone of these events would take more hours than most people would ever take the time to even consider. Please know that I do appreciate the endless hours that both of you give as a team. Mark when you have time to reflect I hope that you will see how much God was in control of our whole day on Monday. His timing is perfect and so was ours and so was the day. I hope that down the road when your ready that I also could help you out with some project ie research, paper work, protest.  Blessings and hugs, XXXXX”

From the wife of a pastor…

“Mark, I just wanted to say thanks for all the work you did putting together that trip. It was well worth going on. XXXXX”

From a Jewish passenger…

“I just wanted to thank you all for yesterday’s experience. I had never been to a memorial event like the one in Ottawa and to say that I was overwhelmed by the intensity of it all would be an understatement. So many wonderful people; so many wonderful lessons.

“Gary and Christine [McHale], listening to the stories of Caledonia and beyond are always fascinating to me and I sincerely hope that you will soon be rewarded for all that you have struggled for. Merlyn, your daughter Olivia is simply charming and I think I am just as excited about her pictures with and autographs of the Prime Minister and other dignitaries as she must surely be. And thank you for the Canada/Israel pins that you so generously gave to all of us.

“Mark, I still do not know how you organize events such as ITW and the bus trip in a matter of weeks when it takes me three days just to figure out if I save more money by going to No Frills instead of Fortinos or the other way around. It was a privilege to be part of this trip and I thank you for the invitation to come along.  You all have my sincerest admiration. Thank you.  Steve”

I was stunned and humbled when the sponsor of our trip – the Canadian Society for Yad Vashem – called to ask if I would light one of the ceremonial candles as one of the representatives of the Zachor Coalition – the collection of organizations which helped support the memorial.
During the earlier days of my involvement in the Caledonia Crisis in 2007 I had the very great honour of meeting Sarah Sibylle Niemoller von Sell, widow of the Christian Pastor Martin Niemoller who was imprisoned for 8 years for defying Hitler. He is best known for his poem, ‘There was no one left to speak for me,‘ which he wrote to express his dismay at the failure of the intelligentsia to speak out against Nazism.
As the son of non-Jewish parents who lived under Nazi occupation and as someone who has done my imperfect best to honour the spirit of Pastor Niemoller’s words about speaking out against injustice, I don’t think anyone could bestow a greater honour than to ask me to light a candle in memory of the 6,000,000 so as to give meaning to the phrase – Never Again!
Thank you from the bottom of my heart to the Canadian Society for Yad Vashem for making this wonderful experience possible for me, and for so many other people. You honoured us with your invitation, and by providing transportation to the event. Thank you to Dave Gordon, my contact at the Society, who did such a great job in coordinating our participation and answering all my questions. The Society should be very proud of your work.
Thank you to Merlyn Kinrade for buying the Israel-Canada friendship pins for us all, and thank you to Olivia Kinrade for making the trip extra-special with your attentive participation. Your father is very proud of you.
Thank you to Gary McHale (a professional wildlife photographer before becoming an activist in Caledonia) for taking the magazine-quality photos during the ceremony.
Thank you to all who made the journey to honour the 6,000,000 Jewish dead as well as the living and their descendents, especially those who came despite serious health issues; you helped make this trip an experience none of us will ever forget.
Thank you also to those who wanted so much to participate, but were unable to do so. After returning home I received this message from Dave Brown of Yad Vashem:
“SUBJECT: With gratitude: Hi Mark, I’m really thrilled again that you could help with the Ottawa trip and please pass along our thanks again to everyone who took the long journey from London/Hamilton.”
Would you like to come next year?
If you would like to be notified if a similar trip becomes available next year, please send an email to Mark Vandermaas, mark@israeltruthweek.org, and ask to be placed on the Israel Truth Week mailing list.
References

We stand in the streets where the hate and violence is. We face them down so you don’t have to … and we need your help

‘NO PEACE WITHOUT TRUTH’ CAMPAIGN 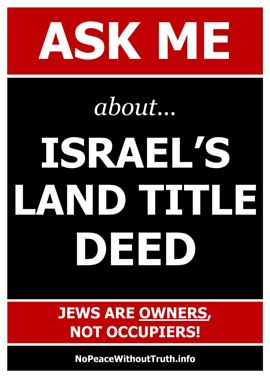 READ MARK VANDERMAAS ON ‘THE TIMES OF ISRAEL’

‘Israel Truth Week’ in the news 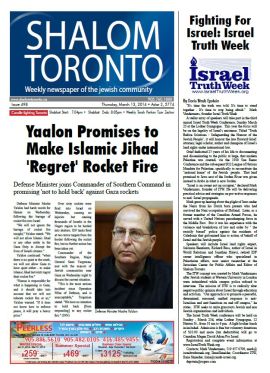 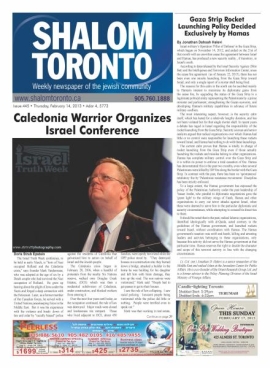 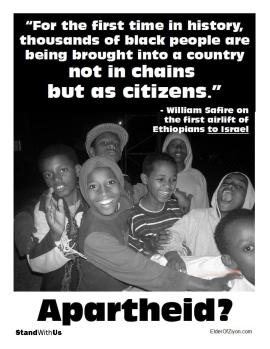 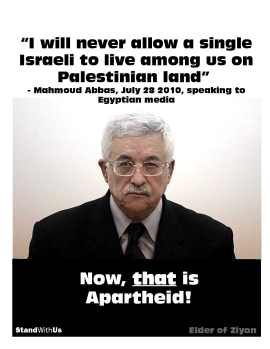